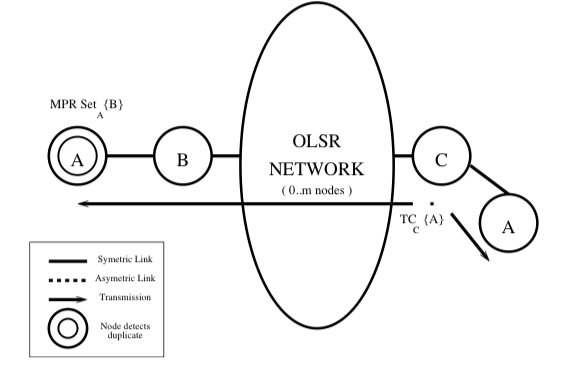 Commonly, duplicate address detection is performed when configuring network interfaces in order to ensure that unique addresses are assigned to each interface in the network. Such mechanisms commonly operate with the premises that a node ”intelligently” selects an address which it supposes to be unique, followed by a duplicate ad- dress detection cycle, through which it verifies that no other active interfaces on the same network has been or is in the process of being configured with the same address. Even as- suming that such a mechanism is present in a MANET, al- lowing MANET nodes to initially configure their interfaces with addresses unique within the network, additional com- plications arise: two or more MANETs may merge to form a single network, and a formerly connected MANET may partition. Thus, unless it is ensured that all MANET in- terfaces are assigned globally unique addresses, addressing conflicts may at any point – not just during initial network configuration.

In this paper, we investigate the task of performing dupli- cate address detection when otherwise independent OLSR networks merge. We benefit from the information already exchanged by OLSR, and identify a number of mechanisms through which a node may detect a conflict between the ad- dress assigned to one of its interfaces, and an address as- signed to an interface on another node. The mechanisms proposed are, thus, entirely passive, creating no additional information exchange on the network.