Just Get Over It: English is the scientific Lingua Franca 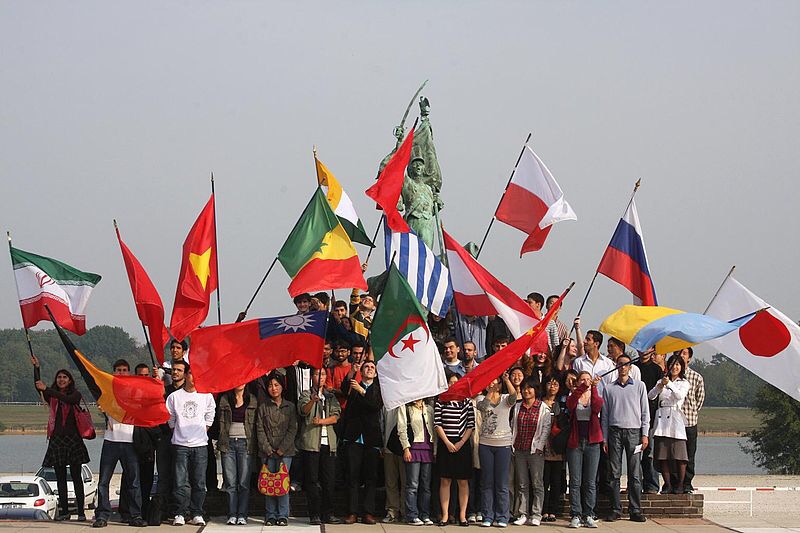 Having lived outside my native country for about half my life, I have gotten used to using “foreign languages”, both professionally and privately. In fact, I use my native tongue so exceptionally rare that it – that every language – has in a way become a foreign language to me.

A faculty colleague of mine just recruited a post.doc from Denmark – someone, even, from my alma mater, and whom I had met when I was teaching there more than a decade back (cue: future a blog posting about how young colleagues have to suffer through 10+ish years of post.docs before getting even an assistant professor position, and any resemblance of stability…)

Well, we had coffee together. And while it was very nice to meet a him, and I look forward to our future social and professional interactions, 2h of “speaking Danish” was frustrating and exhausting, and clearly made me realize that my native language was now a foreign language to me. It wasn’t really a “sad realization”, I had no emotional reaction to the language  issues – it was just that keeping my end of the conversation going was rather hard work …

As it happens, my field of research and engineering is computer networking – specifically, I have done a lot of work in “protocol engineering”. And what is a “language” if not just a “communications protocol”? It allows me to reflect internal state (thoughts…) in symbols that can be interpreted (ideally, non-ambiguously) by an external party. Personally, I map my internal states to 3 different symbol sets regularly (read: I use 3 languages semi-regularly, professionally). I have discussed this numerous times over with colleagues at Ecole Polytechnique, notably with  Bernadette Charron-Bost.

Other than being an gifted research scientist (“directrice de recherche” at the CNRS), Bernadette a very patient and pedagogical Frenchwoman, who during my (so far) 12 years here at Ecole Polytechnique has put up with my poor French, and is one of those who has gently helped me improve to the level of professional proficiency (I lecture in French, for example). Bernadette, of course, has perfect mastery of both English and French language.

Bernadette didn’t agree with me when I said “languages are just protocols. Her view was, that the language used conditions the thought processes. I do not know that that is true, but it is interesting (as a protocol engineer)  to ponder: does that imply that some (all) protocols (languages) are not expressive enough?

Either way, Bernadette and I speak French together – except, when around non-French speakers, in which case we speak English. And that is occurring quite often: our collaborators hail from all over the world, and it is important that we have a Lingua Franca – which turns out to be English.

Now, if Bernadettes point of view is correct, that languages condition our thought processes,  then perhaps using English is actually extremely important for science, and perhaps something would be lost if we were “collaborating with, and publishing in, our native languages”: a  Lingua Franca allows people from different countries, with different native languages and thus with differently conditioned thought processes and approaches, to collaborate – and if I have learned something, then it is that creative ideas arise when conflicting points of views, differently conditioned thought processes, intersect.

While thinking about, and googling for, this topic, I came across the blog of Hans Hüttel. Hans (in Denmark, we are more informal and rarely use titles or last-names…that much I remember)  was my professor in “syntax and semantics” during my own engineering studies – and I also knew him a little bit while I was a PhD student. I was therefore not surprised that he had both thought and written about this topic, and that he was regretting that he rarely got a chance to talk science in his native language (Danish).

But, like Bernadette, Hans (also, unsurprisingly) recognizes the value of being able to collaborate internationally: being in a very narrow scientific field, as most dedicated scientists are after a long career, the alternative would be to not collaborate with anyone at all.

My former colleague Gilles Dowek, who was a professor at Ecole Polytechnique when I joined in 2004 and who now is a research director at INRIA, would go as far as saying (In French, so I translate):

“The best way to promote the French language is to teach in, and offer our elite programs in, English. Only that way can we hope to attract foreigners, who come to France to study…where they will then get French boyfriends or girlfriends, who will then force them to learn French. Whereas if we teach in French, we will only attract students who already speak French…”

Sadly, some other colleagues at Ecole Polytechnique (and this is likely also true elsewhere) take a very different attitude to the use of foreign languages. For example, Marc Giusti, a CNRS research scientist at Ecole Polytechnique, has no qualms about repeatedly overtly aggressing, and even harassing, those of us who dare post to a lab-internal mailing list in a language other than (flawless!) French. In a laboratory of about 140 people, who hail from 16 countries (this was the last official, figure I could find, although it dates back to 2009, my feeling is that the number has only increased), this is of course a very unfortunate behavior to exhibit.

Fortunately Marc Giusti’s kind is a rapidly dying breed: Ecole Polytechnique has 30% international faculty, and about 25% international students in our engineering curriculum.

We are opening an International Bachelors program in 2017, which is taught exclusively  in English. This year (2016), we opened opened Graduate Degrees (Masters’ level) – also, taught exclusively in English. And, of course, several of our core courses are taught by faculty members, who are hailing from abroad. And, to set an example, the president of Ecole Polytechnique will often chose to speak English when foreigners (even otherwise French-speaking foreigners) are around: Ecole Polytechnique has as objective to be a welcoming, international, and inclusive, environment: we discriminate only on academic excellence and commitment – and excellence and commitment is not linked to language, nationality, or origin. Recently, when there was a senior leadership position at Ecole Polytechnique being vacated, our president explicitly reached out, suggesting that international candidates would be encouraged.

On a much smaller scale, of course, my research group counts a Dane (=me), a Chinese, a Spaniard, an American and a Frenchman. And our close collaborators include Japanese, English, …. – and we simply wouldn’t have it any other way.