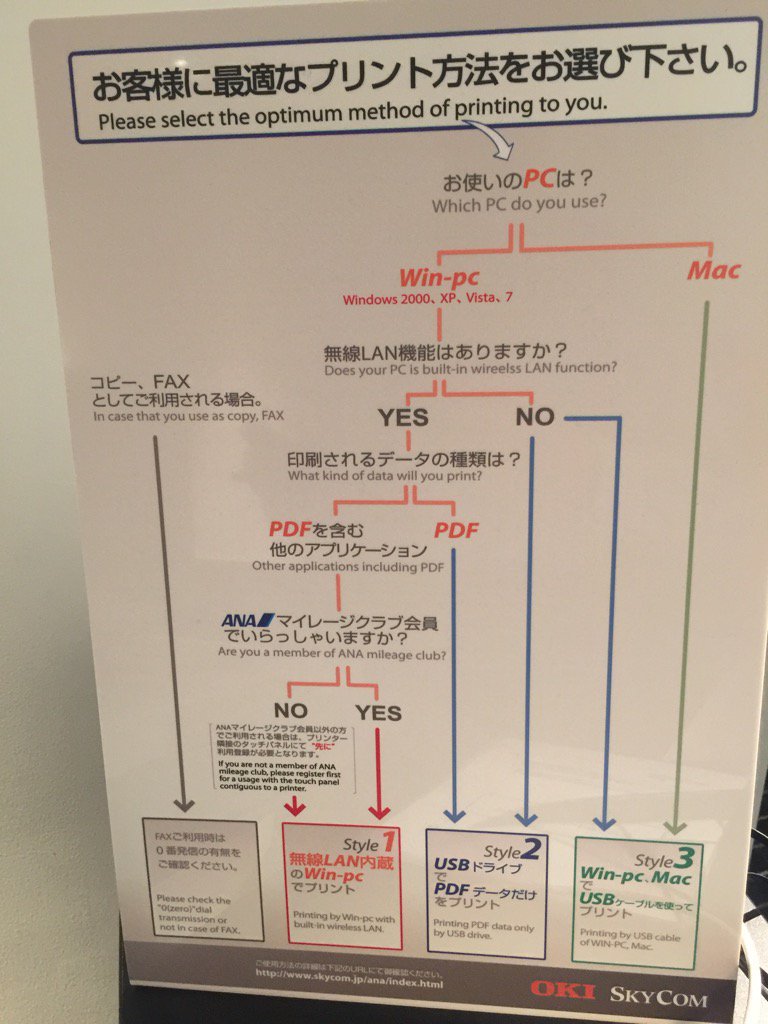 A colleague recently sent me a photo that he’d taken of a poster he’d found somewhere in his office: Which made me think about an encounter I had some time before, in the All Nippon Airways lounge in Narita Airport (near Tokyo). Quickly re-printing a boarding pass, or a map, or a hotel reservation is a nice service for airline lounges to offer their guests.

Quickly … but only if you have a Mac … and an USB cable. Look at this flow-chart, associated with the printer in the ANA lounge: Printers From Hell: Flow-diagram from All Nippon Airways lounge in Narita Airport. Printers seem to be the one great hold-out on user interaction / user interface / user experience – and that, despite companies such as Apple inventing “AirPrint” and the like. I acquired this printer (Canon i-SENSYS MF724Cdw) for my office, under the promises of being able to do everything: AirPrint, printing/scanning over Ethernet, WiFi Direct which seemed a clever way in case a visitor should want to print a document, etc.

It actually does all those things….just not at the same time. If I set up the printer on my Mac so that I can do duplex printing (which requires that I install the Canon printer driver), then I get an error when trying to scan. If I use the Apple-provided driver, then I can scan – but the tick-box for “duplex unit installed” does not work. I have managed to get AirPrint to work, except not on our corporate network somehow – over which IPP works, however. The iOS application “Canon Print Business” is a hit and miss. Trying to use WiFi Direct disables both AirPrint and IPP and the Ethernet connectivity of the printer …

As a printer, it’s awesome: fast, sharp prints. It has proper access control so that those needing to be able to print to it can do so using individual access codes. And IPP just works. And as a scanner, it’s also awesome: duplex, reasonably fast, sharp scans.

But using it requires, almost, a flow diagram as silly as the one from the ANA lounge: Granted, I spent a total of 10min on setting it up and connecting it. At some point I’ll invest a bit more than 10min to do something simpler/better/smarter.

But the fact that more than 10min is required for something as simple as this is evidence that, indeed, printers seem to be the one great hold-out on user interaction / user interface / user experience.