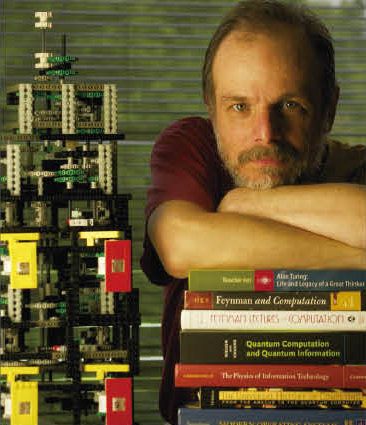 As you no doubt have seen, some of the “recent news” regarding Quantum Communications includes the launching of the worlds first quantum communications satellite — and (very very recently) the first experimental results coming. To help us make sense of it all, one of the very few experts in this field, professor Rodney Van Meter, has come to Ecole Polytechnique all the way from KEIO University, Japan, to give a “Lunch Talk” – jointly organized by the Cisco Chaire and the “Binet Reseaux” at Ecole Polytechnique.

Unsurprisingly, for this exceptional event, we quickly had more people signing up, than we could fit in the lecture room – and with the talk starting in a few minutes, it seems that quite a few more than those signing up have been sneaking in 😉 Abstract
The next information revolution is coming. Data will no long be simple zeroes and ones, but instead will take on characteristics driven by quantum mechanics. How will this change what we can compute and communicate? In this talk, I will lead you through the key ideas in quantum information (with almost no math!) and talk about what we can do with a quantum Internet. I divide the applications of quantum communications into three categories: quantum cryptographic functions, quantum sensor networks, and distributed quantum computation. Some of these functions are drop-in replacements for existing, classical functionality, with additional, desirable characteristics. At least
one of the most exciting is an entirely new capability brought by quantum computation.

About the Speaker
Rodney Van Meter received a B.S. in engineering and applied science from the California Institute of Technology in 1986, an M.S. in computer engineering from the University of Southern California in 1991, and a Ph.D. in computer science from Keio University in 2006. His current research centers on quantum computer architecture and quantum networking. Other research interests include storage systems, networking, and post-Moore’s Law computer architecture. He is now an Associate Professor of Environment and Information Studies at Keio University’s Shonan Fujisawa Campus. Dr. Van Meter is a member of AAAS, ACM and IEEE.

Lunch Sponsor
Lunch is provided, free of charge, to registered participants, curtisy of the Cisco-Ecole Polytechnique “Internet of Everything” Chaire